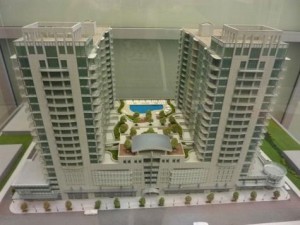 Metropolis at a glance:

Metropolis was the first all concrete and steel, floor-to-ceiling glass, high-rise condo in Midtown. Prior to its construction in 2002, there were traditional high-rise condos and condo conversions in midtown, but a purpose-built high-rise of this caliber and style in Atlanta previously only existed in Buckhead. The complex consists of two 20-story towers with 498 total units sitting atop 820 parking spaces and ground-level retail. As this was a pioneering effort in Midtown, the developers initially planned to sell units in the first tower only, and rent units in the second tower. However, after selling out the first tower in record time, the developers decided to sell units in the second tower, which also sold quickly. Residential units start on the 7th floor, which is also home to the courtyard, pool, grilling patio, fitness center and clubhouse.