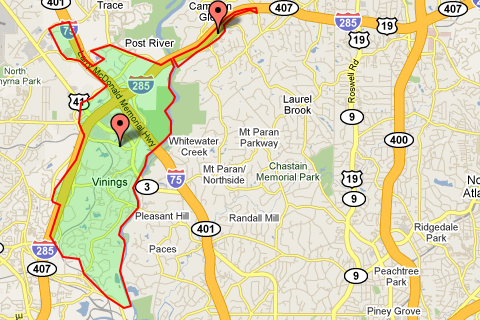 The 30339 zip code encompasses the popular Vinings area in northwest Atlanta. Vinings is the portion of Atlanta, west of Buckhead, nestled between the northwestern portion of I-285 and the Chattahoochee river on the east. Vinings is the only portion of Cobb county that lies inside the perimeter. The popularity of Vinings has lead to the liberal use of the "Vinings" name in developments well outside the perimeter and into the city of Smyrna, sometimes referred to as "Smynings". To be proper, if it's not inside the perimeter and in zip code 30339, it's not Vinings. Condos in Atlanta zip code 30339 range from a low under $100,000 to a high approaching $3 Million. Single-family homes in Atlanta 30339 run from a low in the $300,0000's to a high around $4 Million.

The above search results are from FMLS. Try this search in GAMLS.