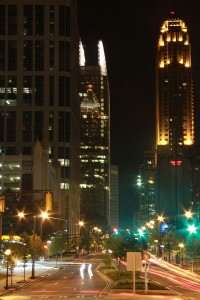 Inner Loop: The inside lanes of I-285, heading east on the top end and west on the South-side.

Langford Parkway: Formerly called Lakewood Freeway, this road runs west from the Downtown Connector to I-285 and then becomes Campbellton Road.

Northwest Expressway: I-75 from downtown through the northwest side of metro Atlanta.

Outer Loop: The outside lanes of I-285, heading west on the top end and east on the Southside.

Perimeter: I-285.  Like the Beltway in Washington, this ring around Atlanta tends to be an unofficial demographic marker, separating the intowners from the suburbanites.

Spaghetti Junction: The intersection of I-85 and I-285 on the northeast side of town.  To be avoided if at all possible!

Top End Perimeter: The northern segment of I-285 between I-75 to I-85, the most congested part of the Perimeter.

West Freeway: Another name for I-20 from downtown through the west side of metro Atlanta.

EAV: You may have seen these stickers on cars around town.  It stands for East Atlanta Village, a hip shopping and dining district in East Atlanta.

OTP: "Outside The Perimeter."  Derisive term intowners use to describe everything outside of I-285, i.e., "the 'burbs."

Locations and other Nicknames:

Five Points: Used to be the center of downtown, where the city's five biggest streets converged. Now it's better known as the city's biggest MARTA station, where the East-West and North-South lines converge. You may pass through this site often, on your way to or from sports or music events.  Not to be confused with Little Five Points. (Defined below.)

The Highlands: Informal (and incorrect) reference to Virginia-Highland.  (Note the lack of an "s".)

The Phil: Phillips Arena, home to the Hawks, Thrashers and various concerts & other events.

The Ted: Turner Field, where the Braves play.

Did we miss anything? If you have any comments, submissions, corrections or suggestions, please let us know!

ITP:"Inside the Perimeter." Inside I-285 or in other words, where the cool people live.

Fashionable "404": The area code historically assigned to phone numbers inside the perimeter.

Hey, Mike. I was reading your comment at http://realestateblogpro.com/blog-commenting-for-... and followed your link here. I am not a native of Atlanta and had often wondered what some of these terms meant. Thanks for enlightening me! I noticed one your missing that I hear often... "Hotlanta". Did Atlanta get the name Hotlanta from the heat or all the hot, beautiful women in Atlanta, or both? I would love to hear your thoughts. Thanks again for the great post.

Being a married man who knows what's good for him, I would definitely say that "Hotlanta" refers to the weather. ;-) However, I also have to agree with many entries over at UrbanDictionary.com that state that nobody who actually lives in Atlanta ever users that term!

I'd agree with all of the above.

1. People do use ITP in some cases.
2. Nobody here says "hotlanta"
3. I needed someone to tell me that the "Ralph David Abernathy" was I-20 when I moved here.
4. Some folks refer to Atlanta as "The Dirty" as in "Put your hands together for the dirty" that you see on T-shirts.
5. When I see the ATL abbreviation I just read it as "Atlanta".

Re: #3, not to be confused with Ralph David Abernathy Boulevard, which is NOT I-20! Which segues nicely into our blog post, The Streets of Atlanta and their Special Annoyances!