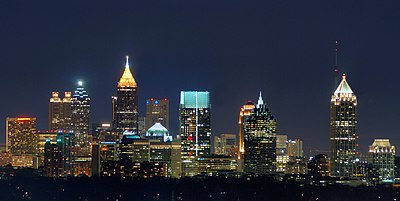 Mouse over the photo to see the names of the most prominent buildings. Click on a building to jump to its description. Click elsewhere on the photo to visit the photographer's page on flickr.

Designed by preeminent Atlanta architect John C. Portman and completed in 1985, this Marriott hotel building is the 14th-tallest skyscraper in Atlanta.  Known as "the pregnant building" due to it's bulging base, at the time of completion its atrium was the largest in the world at 470 feet high.

This 50-story building was completed in 1990, and at 770 feet high, currently stands as Atlanta's 4th tallest skyscraper.  The building was designed by Johnson/Burgee and Kendal/Heaton Asssociates, Inc. and won several awards in subsequent years. The facade is finished with Rosa Dante Granite and the distinctive illuminated "double crown" atop the building figures prominently in the Atlanta skyline.

At 869 feet and 60 stories, the SunTrust building is the second tallest in Atlanta.  Another design by the prolific John C. Portman, it was completed in in 1992 as part of the Peachtree Center complex. The building was originally named One Peachtree Center, but later changed names when SunTrust Bank bought half of Portman's interest and moved their headquarters into the building.

Located on the southern edge of Midtown and towering to a height of 1,024 feet, the Bank of America building is the tallest in Georgia, the 6th tallest in the country, and 9th tallest in the world.  It was completed in 1992 after only 14 months of construction. The open-lattice structure supporting the spire illuminates at night, and if that wasn't impressive enough, the spire is covered in 23-karat gold leaf.

Most everyone knows the Westin building, but fewer may know about the rich history of the site on which it was built. The first building at this location was the Governor's mansion, which stood there from 1870 to 1923. It was then razed for the Henry Grady Hotel. Later, that hotel was torn down as well as the neighboring Roxy Theater to make room for the Westin which was built in 1976. Another one of John C. Portman's designs, the 73-story, 723-foot tall tower was the tallest in Atlanta from its completion until 1987, when the IBM Tower (a.k.a. One Atlantic Center) was built.

Following the history of the company, this building was formerly the Southern Bell Center, then the BellSouth Center before taking it's current name.  This 47-story, 677-ft tall building was completed in 1982. The building is part of a complex which includes two adjacent mid-rise buildings, and has direct access to the North Avenue MARTA rail station. While perhaps not as flashy as some of the other buildings in Atlanta's skyline, they do illuminate all four corners of the building in changing colored lights during holidays and special occasions.

While, at 28 stories and 428 feet, it's not one of the tallest buildings in Atlanta, 1100 Peachtree is especially striking at night. The crown is an octagonal stair-step shape which lights up beautifully at night. Of course, critics might say it's just another of the "illuminated wedding cake" designs that seemed to be so popular in the early 1990s.

Making a dramatic break from the wedding cake design is 1180 Peachtree, a new addition to the Midtown Atlanta skyline. This 657-foot office and retail building was completed in 2006, and achieved the Leadership in Energy and Environmental Design (LEED) gold certification. Two elliptically-curved glass fins extend upwards from the north and south walls, which gives the building a stunning uniqueness, especially noticeable at night.  The building is intended to accompany the forthcoming Atlanta Symphony Center, proposed by the Woordruff Arts Center. As such, the building is also known as Symphony Tower, but we tend to call it the "tweezer building", based on it's appearance from the east or west.

One of the most visibly notable buildings in Midtown is the 40-story Promenade II. Another product of Atlanta's early 90's commercial building spree, this 691-foot tall office building is the 7th tallest in Atlanta. Like the Bank of America building, this skyscraper is set at a 45-degree angle to the street, which improves views for its tenants and increases its impact on the skyline. Like the SunTrust Plaza building, Promenade II features reflective glass and steel and ziggurat-like stepping crown on top. Promenade II was originally planned as part of three similar buildings, one smaller and one taller.  However, the market downturn which occurred shortly after its completion scrapped those plans.

The last building in this lineup was actually the first high-rise of the Midtown business district. Completed in 1987 as the southeastern headquarters of IBM, this building is commonly known as IBM Tower. The success of this building, which quickly attracted corporate tenants, no doubt fueled the building boom in Midtown. At 50 stories and 820-feet, this was the tallest building in Atlanta until overtaken by the Bank of America building. The exterior facade is finished with pink Spanish granite, capped with a copper pyramid and topped with a gold spire. Four years later, its shorter sibling Two Atlantic Center was built with similar gothic design accents. That wraps up our overview of many of the most prominent buildings that makeup the Atlanta skyline. Of course this is not an exhaustive list, and as a residential real estate brokerage, we would be remiss not to mention the many condominiums that contribute to Atlanta's skyline. There are several high-rise condo buildings, especially in Midtown and Buckhead. But that's a subject for another blog post. Check back later and we'll have a full run-down of all the high-rise condo buildings in Atlanta.