Crime in Atlanta - Perception versus Reality

When speaking to people who live OTP, I often find that their perception of living intown is markedly different than the reality that I experience every day. Three of the most common misperceptions I hear about are the crime, traffic and schools -  they're all worse than the 'burbs, right?  Well, I've covered the topic of schools before, so in this article I'll tackle crime, and we'll save traffic for a later article. Often times people who grew up in the metro Atlanta area have their opinions forged over decades past. There is a tendency, as we get older, to have nostalgia for the "good ol' days" of our youth, and think that everything is going downhill now. However, what many may not realize is that, in reality, things have dramatically improved over the last couple of decades. 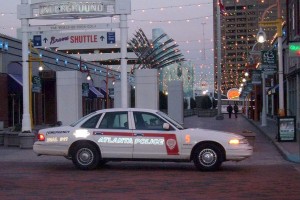 Let's speak for a moment on a macro scale. Because of the 24-hour news cycle and the tendency to sensationalize bad news, many people think we are living in an era of declining morals and increasing violence and crime. In actuality, that's not the case. Stephen Pinker makes the case in his book, "The Better Angels of Our Nature: Why Violence Has Declined," that we may be living in the most peaceful moment in our species' existence. You might say, "Interesting book, but I bet the statistics say otherwise." Actually, no, statistics confirm that crime continues to decline, even since the 2008 economic decline. You might say, "Yeah, maybe globally, but what about here in the U.S.?" Yes, crime has been on a steady decline here in the U.S., too. You might say, "Sure, but crime is getting worse in the big cities versus the suburbs, right?" Wrong. A recent report in the Wall Street Journal, using data from the federal Bureau of Justice Statistics and the Brookings Institution, shows that suburban homicide rates increased 16.9% between 2001 and 2010, meanwhile large cities saw a decline of 16.7% over the same time period. Now you might be saying, "OK, but what about Atlanta specifically?" Glad you asked! The diverging trends of declining crime in the city versus increasing crime in the suburbs is even more pronounced in Atlanta than in other metro areas. According to the same WSJ report cited above, between 2000 and 2008 violent crime rose 23% in the  suburbs while dropping 49% in the city of Atlanta.

This quote from Wikipedia sums it up quite succinctly:

Between 2001 and 2009 the crime rate in Atlanta dropped by 40 percent, according to the FBI. Homicide fell 57 percent. Rape was down 72 percent. Violent crime overall was down 55 percent. Atlanta’s public safety improvement between 2001 and 2009 occurred at more than twice the rate of the rest of the country. Crime is down across the country, but Atlanta’s improvement has far surpassed the national trend. This relative improvement explains why Atlanta—after ranking in the top five highest crime cities for most of the previous three decades—now ranks 31st. Atlanta has lower crime than Salt Lake City, Orlando and Tacoma, Washington.