Of course, this doesn't mean that all of the sprawl that has occurred over the last several decades will somehow magically vanish. A drive from Lake Lanier to the airport during a Friday-500 rush-hour will remain an experience you'll want to avoid at all costs, if you wish to retain your sanity. So that won't change, but as Leinberger says, "The pendulum is now swinging in the other direction." He continues, “Despite Atlanta’s reputation as a sprawling, auto-oriented region, the metropolitan area has already begun adjusting to the walkable urban trend on the ground in a surprisingly rapid manner.”

The report makes the following points:

The report coins the term "WalkUPs," for "Walkable Urban Places". It states that there are seven types of regionally significant WalkUPs in any metropolitan area, and Metro Atlanta has at least one example of each. 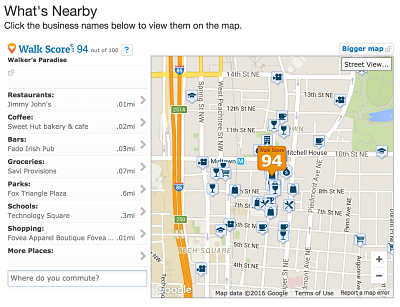 We believe factors outlined in this report underscore the benefits of investing in real estate inside the perimeter of Atlanta. Couple that with the fact that Atlanta remains the top destination for movers, and you've got If you're looking to take advantage of this trend and buy a home in a walkable intown community, you've come to the right place. Each listing includes a WalkScore map showing how walkable the home and nearby ameneties. Check out these powerful home search features today, and let us know if you need any help!