If you're involved in the Atlanta residential real estate market in any capacity, buyer, seller, agent or other, you've noticed that something has changed over the last year. The market has shifted significantly. Homes are selling fast, and I mean crazy-fast.  What's "crazy-fast?"  Days.  Sometimes just one day.  Sometimes not even a day. Often with multiple offers.  I've experienced faster than expected sales recently on both sides of the transaction, on my own listings and when representing buyers.  And from speaking with other agents around time, I'm not alone.  "Sure," you might say, "that's anecdotal evidence, but is it really true for the Atlanta market as a whole?"  I looked at the numbers and here's what I found.

I checked the FMLS records over the last 3 years to see how many homes sold each year in various days-on-market brackets. For the purposes of this blog post, I'm just using single-family homes sold in the city of Atlanta. Below are the numbers:

Homes sold in 14 days or less in Atlanta:

Homes sold in 7 days or less in Atlanta:

Homes sold in 3 days or less in Atlanta:

Homes sold in 1 day or less in Atlanta: 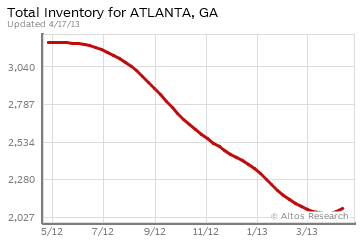 Looking for a deal?

"I'm looking for a really good deal." That's what just about every buyer says when they first speak with us about buying a home.    Not that they're looking for a particular style of home with a specific number of bedrooms or baths, a specified location or even whether it's a condo, townhome or single-family home. We’re finding that buyers are focusing more on the type of deal they can get rather than what attributes they really want in a home.

Of course, everyone wants a good deal, but it's important not to get so tunnel-visioned that you miss out on the perfect home for you, because you're holding out for the deal of the century.   Do you want a good deal on a home you love, or a great deal on a home that's just OK? You have to live there. If you don't love it, is it really that great of a deal?

Let's say the graphic represents the housing market.  Although the market is cyclical, with ebbs and flows,, most people tend to think in a straight line. Point A was near the peak of the market. Although the market was overinflated, many people thought that prices would continue to climb. This was a contributing factor to the "bubble" that occurred in some markets.

Then, the market began to take a turn in the opposite direction.. Let’s say that now we're at the other end of the spectrum (point B). The market has turned downward and people wonder if we’re near the bottom. The big question on everyone’s...

On Wednesday, President Barack Obama signed the $787 billion Economic Stimulus Plan into law.  We're not going to get into the politics, but simply discuss its impact on our little corner of the world -- residential real estate.

Last year we told you about the Housing and Economic Recovery Act of 2008, which was  a tax credit for first-time home buyers.  The 2009 stimulus plan also includes a tax credit for first-time home buyers, but  is much improved over last year's.  This new plan provides a tax credit  up to $8,000, while the  2008 tax credit was capped at $7,500. That's not the key difference though.  The truth is that the old tax credit was actually an interest-free loan that buyers  had to pay back to the government over time.  The new tax credit does not have to be paid back ever, as long as the buyer doesn’t sell the home within the first three years.

It's important to note that this is not a tax "deduction." It is  a tax "credit."  That means it doesn't just offset your taxable income, it actually reduces your tax burden dollar-per-dollar up to $8,000.  That's right, first-time home buyers can receive  $8,000 of "free money" to buy a home in 2009.

Of course, with all government programs, there are some restrictions.  If you would like more information on how these restrictions might affect you, feel free to contact us.

Real Estate is On Sale!

It’s been a while since we made a blog post, partly due to the holidays, but partly because we have been busy with several new buyers.  Why, in an uncertain economy, are so many buyers jumping into the real estate market?  Do they know something you don’t know?  It’s really quite simple - the current market condition represents an unprecedented opportunity for home / condo buyers.  So what makes now such a great time to buy?

That’s because there are currently many more people trying to sell real estate than there are people willing and able to buy.  That means prices are lower and sellers are more negotiable now than in the past.

Qualified buyers have the power.  Not only are there fewer buyers than there are sellers overall, but banks are being more strict on their lending standards.  Gone are the no-doc “liar’s loans”, sub-prime, Alt-A and other crazy loan products that created the financial mess we’re in.  These tougher standards make qualified buyers even more scarce.  If you are a qualified buyer in this market, you are the rare gem.  This gives you the upper hand in negotiations.

Not only can you get a reduced purchase price on a home, but your cost to borrow money is also at historical lows.  Many Atlanta mortgage lenders have reported rates under 5% for a 30-year fixed-rate mortgage!  This also increases your buying power, enables you to buy more home for a given payment, or get a lower payment on a given home.

Human behavior is sometimes irrational and we often repeat our...