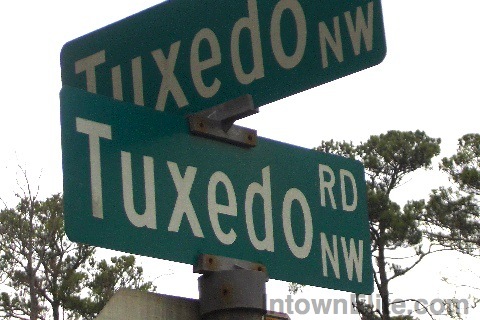 Here's something you won't hear in most towns, "It's on the corner of Briarcliff and Briarcliff." But that can happen all over Atlanta, thanks to the use of different suffixes, like "Road" and "Place." I don't know if it's lack of imagination or what, but it seems that they (whoever "they" are) have run out of names. So, one must be very careful in Atlanta to specify the suffix when speaking of a particular street (or avenue, or boulevard, or road, or place), although even that may not keep you safe. There is one spot in Buckhead where Powers Ferry Rd NW intersects with Powers Ferry Rd NW. How a road can intersect with itself, I'll never know.

Then there's the illogical numerical addresses. In most cities, "805 Peachtree" would be in the "800 block" of Peachtree, in other words near the corner of 8th and Peachtree. Not here! In Atlanta, 805 Peachtree is actually between 5th and 6th. Why? Who knows! All of this is exacerbated by notoriously poor signage throughout the city. In many cities, major intersections are well-marked with large, sometimes illuminated street signs that are suspended in clear view above the intersection along with the traffic lights. On most intersections in Atlanta, there is one, very small street sign on one of the four corners of the intersection. What fun it is trying to find which corner the street sign is located as you're trying to navigate an unfamiliar area.

Anyway, eventually you'll get used to the nonsensical labyrinth of streets that is Atlanta, and it will become second nature. Once that happens we're confident that you'll learn to love Atlanta as much as we do.  And we really do!